A suspect in a reported stolen motorhome led law enforcement officers on a high-speed chase from the Santa Clarita area into the San Fernando Valley Tuesday night, hitting multiple vehicles and narrowly missing others before crashing into a tree and a car in Tarzana and coming to a stop.

A woman in a reported stolen motorhome led law enforcement officers on a high-speed chase from the Santa Clarita area into the San Fernando Valley Tuesday, May 21, 2019, hitting multiple vehicles and narrowly missing others before crashing into a tree and a car in Tarzana and coming to a stop. At one point during the chase, the woman had two dogs in her lap. (Screengrab courtesy of ABC7)

Julie Ann Rainbird, 52, of Winnetka was booked on suspicion of offences including “evading a police officer causing injury or death,” and was being held in lieu of $100,000 bail, the California Highway Patrol reported. She had also been wanted on unspecified warrants.

The chase began about 7:05 p.m. in the Towsley Canyon area, according to the Los Angeles County Sheriff’s Department. 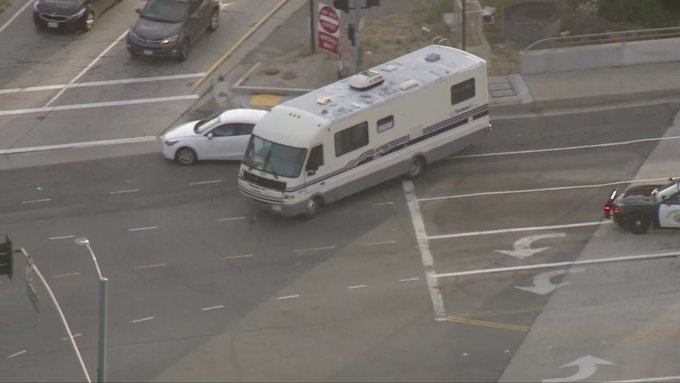 WATCH #LIVE: Police are in pursuit of a female suspect in a stolen motor home in Porter Ranch https://cbsloc.al/2RTxPBS

The suspect drove on freeways and the city streets before the pursuit ended about 7:35 p.m. near Tampa Avenue and Wells Drive.

Along the way, the suspect ran red lights and at times drove on the wrong side of the street, at one point broadsiding a car in the area of Tampa Avenue and Ventura Boulevard and narrowly missing others. 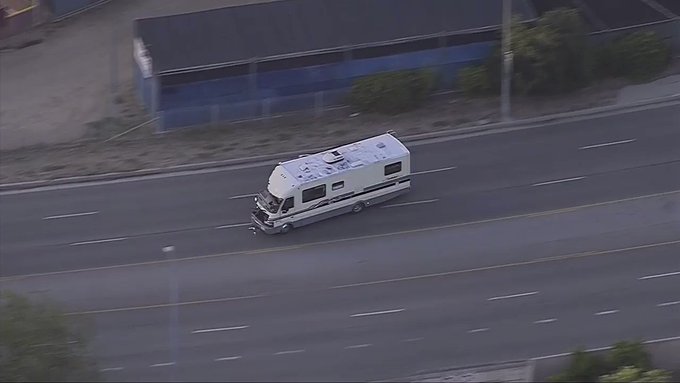 WATCH LIVE: A dog just fell out of the motor home that is being chased by police. The dog appears to be OK. The motor home is still continuing, after sustaining significant damage. http://4.nbcla.com/vP1ynev

The suspect, at times with two dogs on her lap, also drove through a parking lot where the motorhome slammed into a palm tree, tearing away the front and right side of the vehicle and causing its windshield to fly away.

The speeding motorhome, with debris flying out and liquid spilling onto the road as the suspect maneuvered wildly, also struck some parked vehicles and pushed others out of its path.

One of the dogs leaped or fell from the vehicle and ran off during the chase.

After the final crash, which appeared to injure a motorist who was driving into a driveway, the suspect tried to run from officers with the second dog following, but she was quickly caught and cuffed, blood pouring from her face.

The woman was handcuffed to a gurney and placed into an ambulance.

Both dogs were corralled by officers and placed in the custody of Los Angeles Animal Services with non-life-threatening injuries.

The motorhome was reported stolen out of Simi Valley, according to the Sheriff’s Department.

You can find out more about which cookies we are using or switch them off in settings.

This website uses cookies so that we can provide you with the best user experience possible. Cookie information is stored in your browser and performs functions such as recognising you when you return to our website and helping our team to understand which sections of the website you find most interesting and useful.

Strictly Necessary Cookie should be enabled at all times so that we can save your preferences for cookie settings.

If you disable this cookie, we will not be able to save your preferences. This means that every time you visit this website you will need to enable or disable cookies again.